Discovering the Forest, in Winter

Jim Nordgren, a local naturalist and member of the Lewisboro Land Trust, led the class through the farm's hardwood forest and open fields.

Although it was less than a mile from Meadow Pond Elementary School, it seemed like a different world—a wild one where animals forage and hunt and tiny birds fluff their feathers for warmth. 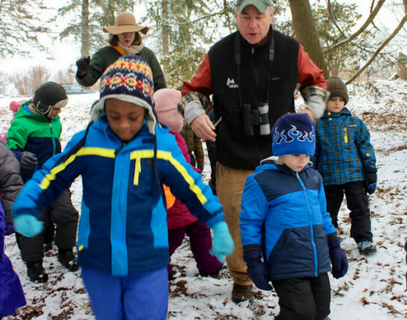 "We saw lots of tracks!” said Mrs. Kovatch. “After some investigation and expertise from Jim Nordgren, we realized one set of tracks was from a fox. We followed the tracks and discovered, to our great surprise, that it had caught and eaten something.  The other tracks belonged to deer, rabbits, and squirrels.  We also saw a hawk's nest and kinglet birds."

This was her kindergarten class’ second hike with Nordgren on the 1.5-mile trail at Onatru Farm Park. The first one was in the fall. The children will return again in the spring. These small field trips are just the right size for young children to experience and reflect on changes in the natural world from season to season.

“We've been having a blast,” said Nordgren. “I am always so happy to see children’s sense of wonder in the woods. There really is very little a guide needs to do when walking with the students in the woods. We just have to put the kids and the woods together and something magical and awesome happens.”

“I remember the first hike I led last November with the students,” continued Nordgren. “I had a long list of things to talk about. As soon as the children got off the bus and started hiking, all the planning went out the window. They were so excited about the plants and animals and had so many questions and comments.”

Teachers record the children’s observations in field notes and photos which will be used in the classroom to ground science units on weather as well as animals and plants and their environments.

Hallmarks of a Winter Forest

Jason Briggs and Amy Houglund’s kindergarten classes hiked at Onatru Farm Park the week before. While there wasn't any snow, the children noted other hallmarks of winter.

“We talked about how the pond was frozen over but the creeks were not. The children remembered what the woods looked like in the fall and observed that the stream’s water level was higher, it was colder outside, and skunk cabbage was sprouting,” said Jay Briggs, kindergarten teacher.