Recycling Matters Club collected 8,550 bottles and cans . . . and much more! 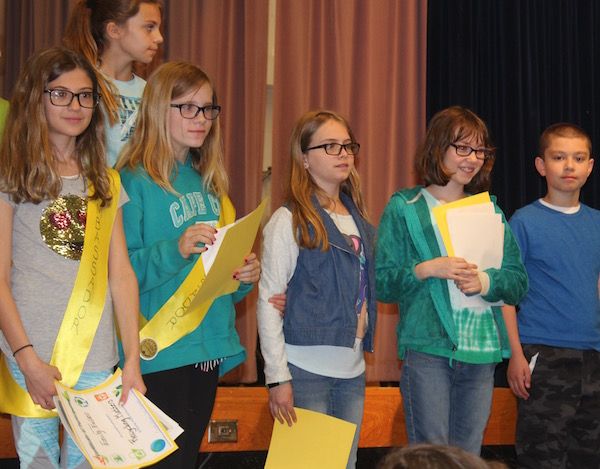 The Recycling Matters Club has been collecting refundable bottles and cans since September. At Meadow Pond's May Town Meeting, they shared the tally.

“So far we have collected 8,550 bottles and cans. That’s $427,50,” Aisling told the students gathered in the cafeteria to a round of applause.

“We have donated the money, or purchased items with the money, to organizations including Temple Shaaray Tefila in Bedford, the Veterinary Cancer Center of Norwalk, 13 Hands Equine Rescue, Lewisboro Police K9 Division, Friends4Michael, and Relay for Life,” said Quinn.

There was more good news to share, because the club, a group of approximately twenty fifth graders, had been collecting other items throughout the year.

“In April, we collected clothing and linen, and, until June 9, we are collecting indoor/outdoor recess supplies and sporting equipment,” said Brooke. 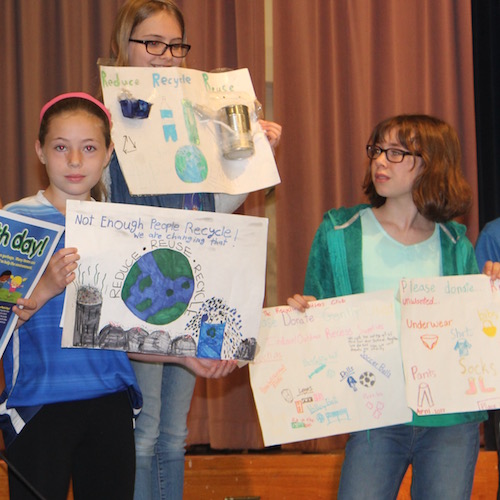 “All the collections have been donated to organizations that include Katonah Community Center, the Lions Club, Big Brother and Big Sister Foundation, AT&T, Spin Green, and even Meadow Pond,” said Dakota.

“This year’s Recyling Matters Club has been amazing,” said Dr. Monasch, the club’s leader. “Their enthusiasm and commitment is something I have never seen before. They are heading to John Jay Middle School where there isn’t a recycling club. This is the group to start one.”

The club also promoted Earth Day—supplying two weeks of questions to Meadow Pond Live, and making posters to represent the ideas of reduce, reuse, and recycle. Some of the posters were submitted to New York State Senator Latimer. Dr. Monasch handed out certificates from his office to the students that participated.

“Next year we will need a new group of wonderful fifth graders to take over,” said Dr. Monasch.

A Committed Group of Students

“I joined the Recycling Matters Club because it’s a good way to help the environment at school.”

make the earth a better place

“I wanted to make the earth a better place. I like making colorful posters for the whole school to see, and counting bottles and cans.”

“I wanted to help the environment and raise money for the school and other organizations.”

“I knew the Recycling Matters Club is an important way to help the earth. I like how we all get the chance to promote the club and donate to different organizations. I hope next year’s fifth graders will join, too.