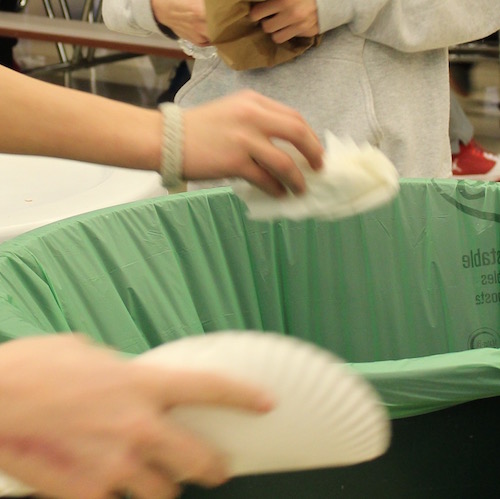 Michael Fassert learned to compost at Katonah Elementary School (KES). “Each day we collected food scraps from our lunches and snacks and put them into a barrel outside. In the spring, we took the compost out and put it into the garden,” remembers Fassert. “It was interesting to learn how we could make soil.”

The good habit of separating organics from garbage continued through John Jay Middle School. Now Michael Fassert and his classmates are freshmen at John Jay High School, where the cafeteria only has two bins: trash and recycling. “I bring my lunch leftovers home,” said Fassert.

This will change in 2017, when John Jay High School begins collecting its organics—closing the gap in Katonah-Lewisboro School District’s award-winning composting program.

When KLSD began composting in 2008, it was one of the first cafeteria composting programs in New York State. Accolades for its pioneering work include Green Awards from the Town of Bedford, an Earth Day Recognition Award from Westchester County, and two grants from the New York State Association for Reduction, Reuse & Recycling. Stories of KES’ success spread, and schools from Scarsdale, NY, to Bucks County, PA, have sought out KLSD’s advice.

“More schools are taking organics out of their waste stream,” said Veronique Choa Pittman, a Katonah resident who works for Green Schools Alliance, a Washington, D.C. based program that supports whole school sustainability. “While we don’t have accurate numbers on school composting, we are about to relaunch a new Measuring and Reporting framework to track this and other trends,” said Pittman.

“It is important to build such systems from the ground up, starting with the youngest students,” said Terry Costin, Assistant Principal at KES. He was instrumental in developing the school’s wellness and sustainability policies and using them to transform cafeteria food and reduce the amount of materials going into the waste stream.

While each of Katonah-Lewisboro schools has compost captains and sustainability clubs that engage students, district support is key to composting success. Monitors help children sort their cafeteria waste into color-coded bins: brown for trash, blue for recyclables, and green for food scraps and paper napkins. Custodians provide the final check and weigh the proceeds to create the data that track and document the efforts.  Suburban Carting brings the compostable material to New Milford Farms, an organics recycling facility in New Milford, CT, where it is processed into the compost that enrich gardens and greenhouses locally.

“We are composting tens of thousands of pounds on a regular basis—two times as much as we throw away,” said Paul Christensen, KLSD Director of Facilities. “This is part of the district’s zero-waste strategy. We’re also mulching our grass and leaves, and using single stream recycling.”

Zero waste is one of the highest bars in sustainability. It means that all products are reused and no trash is sent to landfills or incinerators. In 2008, KLSD Board of Education appointed a Sustainability Committee to methodically move towards this goal.

“We began by taking inventory to understand how we were using resources,” said Rich Stone; Board Trustee, parent of KLSD alumni, and chairperson of the committee.

This group helped KLSD reduced paper use by about 40%. It also worked with transportation department to pass an anti-idling law for buses and cars, and upgrade district buses to clean diesel. The district now fertilizes fields with a compost tea rather than chemicals and has replaced many water fountains with water bottle filling stations.

The Sustainability Committee conducted a Greenhouse Gas Inventory in 2009, one of the first school districts to do so, and presented the Board of Education with a plan to reduce greenhouse gases by 2015. “We replaced the middle school’s ancient boiler, upgraded windows and replaced 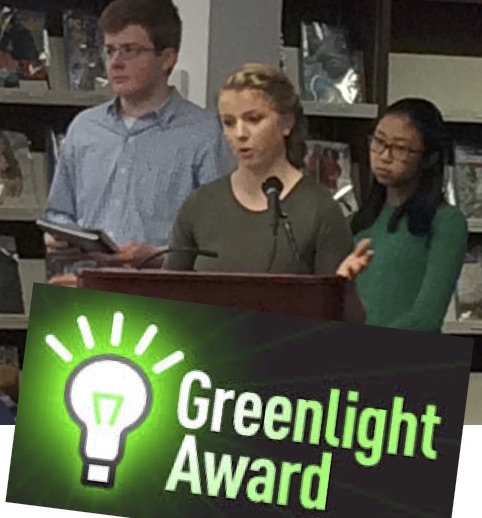 lightbulbs.” said Christensen. “We reduced our greenhouse gas by 24% by early 2016.”

“Michael Fassert and the other ninth graders have been composting for years and can show other high school students what to do,” said Costin.

John Jay High School’s Sustainability Club is also key to the school’s transition. The club’s project for Bedford 2020’s Greenlight Award, a spring 2017 competition, focuses on effective ways to convey that leftover food and napkins go in the compost bin. The team's proposal was selected to move forward as one of the finalists in the competition, and they received seed funding to carry out their project. They will present their findings in the competition's final round this May.

Collecting organics throughout all schools is not the only composting milestone at KLSD this school year. In fall 2016, some of the compost made from students’ lunch leftovers came back.

“We bought three pallets of compost from New Milford Farms this fall,” said Christensen. “We’re using it on the district’s teaching gardens.

In February 2017, John Jay Middle School’s Sustainability Club will take a field trip to New Milford Farms to see for themselves what happens to their cafeteria waste.

Katonah Elementary School (KES) began a composting pilot program in individual classrooms in 2008, which grew into a school-wide initiative in 2011.

All three KLSD elementary schools were taking their food scraps out of the waste stream by the 2012-2013 school year.