“Reading helps us understand other people’s struggles,” said one fifth grade student. “We become better people when we talk about what we’re reading with other people,” added his classmate. “We see things from other perspectives.”

Just five years ago, these students were using toy magnifying glasses as a reminder to look closely at the parts of each word as they decoded it. The progress a reader makes in elementary school is momentous. Katonah-Lewisboro’s strong curriculum builds students’ overall skills in communication—reading, writing, speaking and listening—equipping them to express and exchange ideas effectively.

“Our focus is on active literacy,” said Mary Ford, Katonah-Lewisboro’s assistant superintendent of curriculum and instruction. “Our curriculum purposefully and consistently strengthens the three components of literacy: word study, fluency and comprehension.” 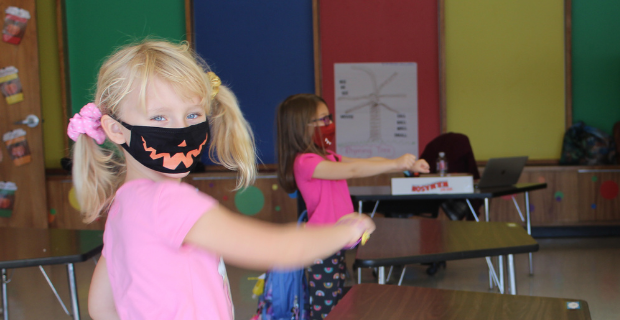 Walk into Colleen Walsh’s kindergarten class at Increase Miller Elementary School first thing in the morning and you’ll catch her class doing daily phonics exercises. She and her students say each letter of the alphabet and the sound it makes in unison while moving their arms together. Then they do it backwards, Z to A!

“I do some kind of letter movement each day,” said Walsh. “It helps students acquire letter sounds and focus during reading time.”

This type of daily routine is one way that students in the lower grades develop phonemic awareness – the recognition that words are made up of separate speech sounds. Here, students use this multi-sensory approach to strengthen their knowledge of letters and sounds.

“Tap it, blend it, say the word, write the word.” Katonah Elementary School’s first grade teacher Rebecca Wayland and her students say this progression together as part of a phonics lesson on blending sounds. “Tap it” means to touch a finger to their thumb for the separate sounds they identify at the beginning, middle and end of words.  This is a strategy taught through Fundations, the resource used for word study in grades K-3 across the district and reinforced during reading and writing workshop.

“Duck, quick, bath, chop,” the students tap together, then write the words on their desk-sized white boards. Wayland checks in one by one and celebrates their achievements with “air high-fives.”

As they move to reading sentences, Wayland asks, “Are we going to guess what a word is?” “No way!" she emphasizes. "We’re going to use what we know about sounds to help us figure it out.”

She reminds students that they are word detectives and one of their missions is to do a slow check to make sure that what they are reading looks right, sounds right and makes sense.

“The powerful thing about mysteries is they have a way of hooking readers into books. While students follow clues and try and solve their mysteries they build up their reading stamina because they can’t put their books down,” said Alison Porcelli, staff developer for Katonah-Lewisboro’s elementary schools. “The more students read, the better they get at reading with accuracy and higher levels of comprehension.”

Teacher Connie Merritt adds to the fun by playing the theme song to "The Pink Panther" as the students transition from persuasive writing to mystery reading. First, some vocabulary. Terms like red herring, culprit, motive and suspect are reviewed. Next, students pair up with a pre-assigned breakout buddy and talk about what they are reading. Then, a solid twenty-minute block of reading, during which Merritt has mini one-on-one book chats with students.

“What clues did you notice in your reading?” Merritt asks the students. “Jot it down in your reader’s notebook, then share it out.”

“The mummy came out of the coffin.”

“It’s not a clue but I noticed figurative language.”

reading comprehension is built through discussion and writing

“I think the marshmallow cake is no accident,” said one of a trio of fifth graders, referring to the dessert the mother in “Charles,” a short story by Shirley Jackson, is eating in the final scene. “That mother is intense,” said another student. “That’s the moment the mood of the story changes,” said the third member of the book group, paging to the end of the story to read that part out loud.

It was day one of book groups in Geneve Patterson and Susan Hirsch’s fifth grade class at Katonah Elementary School. The class had spent a full period preparing for the productive and thoughtful exchanges, discussing important components including everyone having the text in front of them, looking at the person speaking and building on each other’s thoughts.

Another important part of the preparation was the close reading the students did prior to the discussion. “Annotate the text,” Patterson instructed, “and take notes in your reader's notebook about character traits, turning points, struggles and themes.”

Before lunch, students posted some of the big ideas they discussed on Pear Deck for the whole class to see. “We’re going to take it to another level tomorrow,” said Patterson. “You are going to be writing an essay about one of these big ideas.”